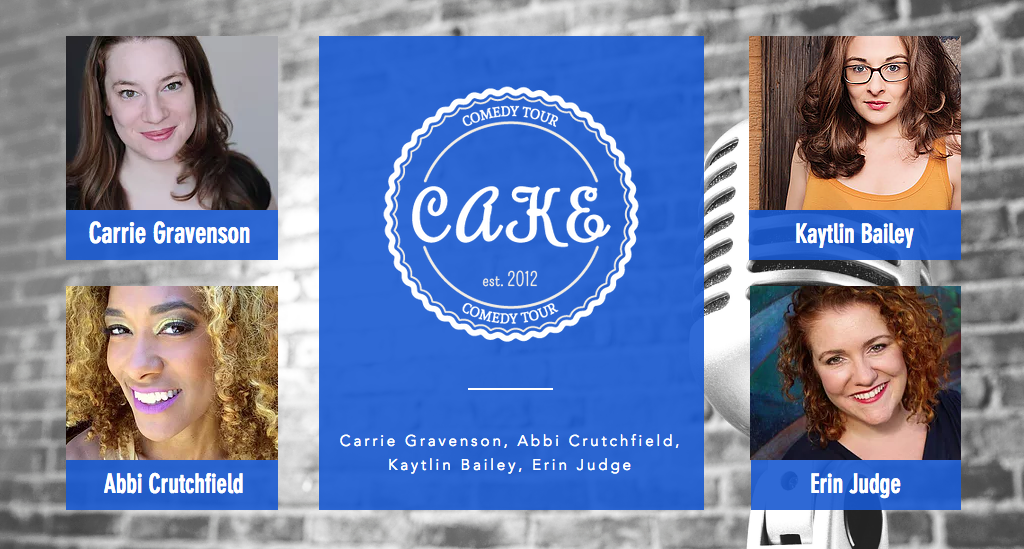 Have you heard about the CAKE Comedy Tour? CAKE is four fabulous ladies (Carrie Gravenson, Abbi Crutchfield, Kaytlin Bailey, and Erin Judge) who are taking their act on the road this spring and summer. They've got an innovative way of booking shows, too—through a Kickstarter campaign. If the ladies raise $1,000 in pre-show ticket sales, they'll be in Asheville on Thursday, May 4, where they'll perform at the Southern.

The women of CAKE were initially the Pink Collar Comedy Tour, and they rebranded as CAKE (because who doesn't love cake?) this year. They've performed on Full Frontal with Samantha Bee, Broad City, and Last Comic Standing, and they've already raised enough for shows in Philadelphia and Washington, D.C.

The Kickstarter campaign is all about pre-sales, so backers will have a shiny, bright event ticket awaiting them if CAKE meets their funding goal. Tickets are $25, and discounted student/artist tickets are available as well. We talked with the members of CAKE about the Kickstarter campaign, the tour, their favorite comedians, and why they want to come to Asheville. Check it out!

Tell me a little bit about who you guys are.

We're the CAKE Comedy Tour: Carrie, Abbi, Kaytlin & Erin have been touring together since 2012 as the Pink Collar Comedy Tour. We met at New York comics, but Erin and Abbi have relocated to LA, so we're bicoastal now. We're fun ladies.

What made you rebrand as CAKE after being the Pink Collar Comedy Tour?

Everyone loves CAKE, but everyone (except Kaytlin) hated the name Pink Collar Comedy Tour. We especially hated listening to Kaytlin drone on about "low-status wage work for women."

You're using the Kickstarter platform to promote your upcoming show and sell tickets. What made you decide to go this route? What have been some surprises (good and/or challenging) about using it as the platform?

We've been touring for five years. Most of our shows have great crowds, but a few places have been disappointments. It's so hard to tell which producers to trust & what venues really care about the show, so we decided to let our fans tell us what cities to go to. This way, by the time we reach out to a venue, we already know we'll have a crowd. When anyone tells us they don't know how to promote a female comedy show, we can show them how to do that! Plus we get to buy shirts, buttons & stickers with ticket sale money instead of putting it on Kaytlin's credit card.

I like that you talk about how Kickstarter has taken some of the risk out of touring. How are other internet/web-based technologies changing comedy and touring?

Facebook, Twitter, Instagram all let fans connect directly to artists they love. That connection starts a dialogue between fans and creators—what they want & what we need. We keep hearing from people all over the country that they want to see more women doing stand up, and they want us to return to their town. For us to do that, we need to know that we're not going to lose money. Kickstarter makes that possible.

Who are some of your favorite comedians?

Have you been to Asheville before? Why do you want to come (or come back)?

We love Asheville! We've performed here twice at the Altamont Theater & had a blast both times! If you bring your pink collar button to the show we'll give you a free CAKE button & a big group hug!