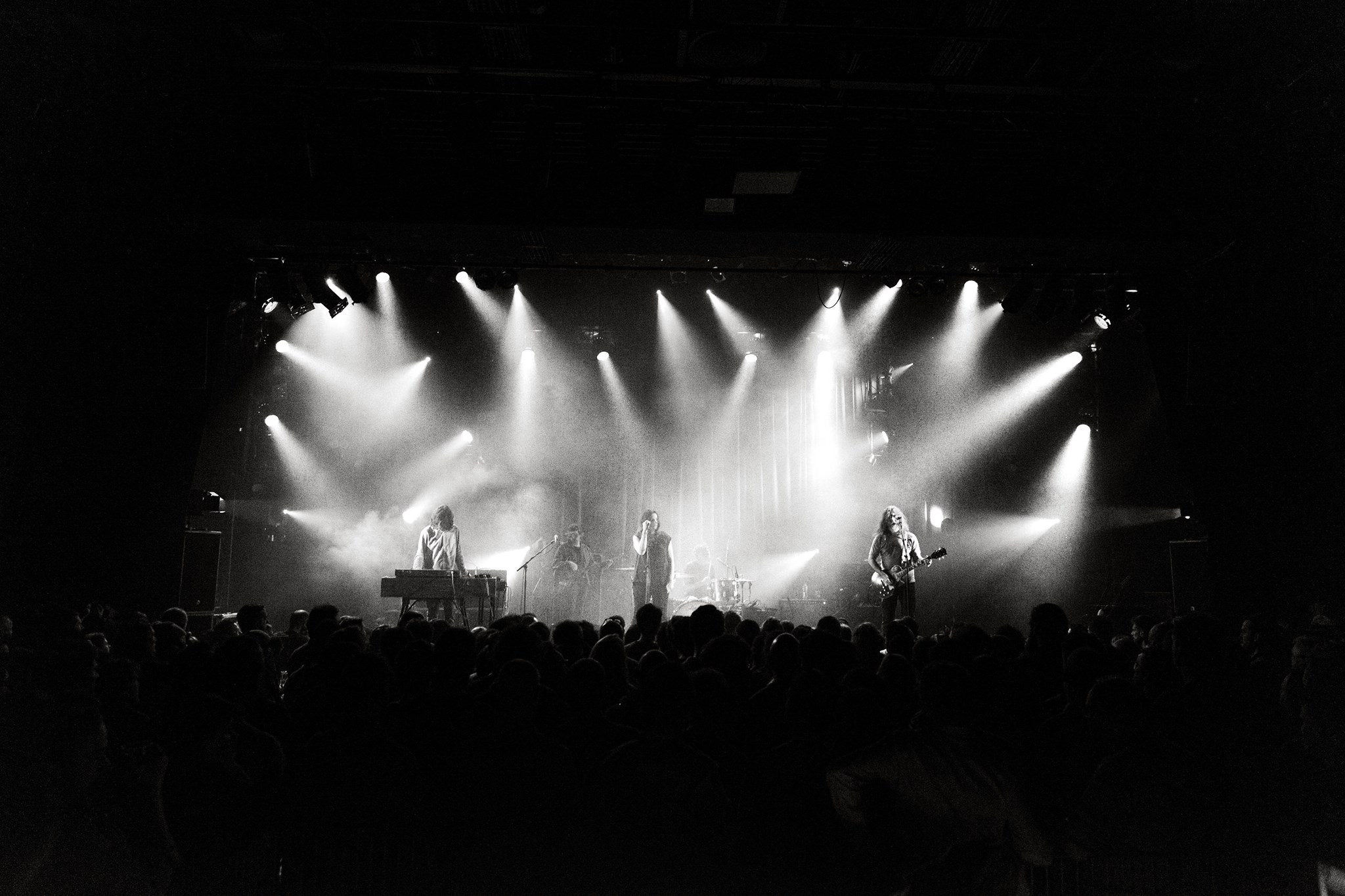 I've been a huge fan of rock band Black Mountain for several years now, ever since I heard their keyboardist Jeremy Schmidt's soundtrack for the captivating and nightmarish SF film Beyond the Black Rainbow, which he composed under his solo project, Sinoia Caves. It was through this lens of the profoundly eerie, psychedelic, and unabashedly experimental that I came to know and love Black Mountain. The group just released an album, IV, on Jagjaguwar that has been garnering rave reviews, and they're touring in support of the album. To my amazement and delight, they're playing at the Grey Eagle this Thursday.

Lucky for me, the whole group is stepped in the sounds of psychedelia pulsing to the unabashed intensity of classic hard rock. What makes Black Mountain so damn great is the way that these elements come together to reflect the past while steadily moving forward into new territories of sound.

The band's elements transcend simple genre. You don't have to love hard rock or psychedelia to love Black Mountain--ultimately they're doing something unique. But if you do love the sweet sounds of progressive rock, metal, psychedelia, and experimental music, you're in for a particular treat. I could list off all of the fantastic groups that Black Mountain channels, but really you should just listen for yourself and discover what all the fuss is about.

Schmidt's strange and transcendent keyboards are just one highlight among many. Vocalist Amber Webber's lilting voice is another one of my favorite things about Black Mountain. I'm a big fan of hard rock and metal bands that feature male and female vocalists because I love the range of sounds that this combination can create.

Webber's dreamy voice works well with the raspier sounds of singer and guitarist Stephen Gordon McBean. The tracks on IV use both voices, which are complemented by the instrumentation of hard guitars and the pulsating percussion of drummer Joshua Wells. The heaviness of many tracks is balanced out not only by the synthesis of Webber's and McBean's vocals but also by some tracks like "Line Them All Up," which bring a flowing and softening element into the album. This track features Webber and is infused by her strong but perfectly tremulous voice.

It's a testament to the genius and skill of Black Mountain that they are able to shift moods like this throughout IV without any jarring transitions. Most of the songs have dark edges, but they shade into the celebratory, even the joyful. The song that follows "Line Them All Up," called "Cemetery Breeding," is a great example of this. It's jangly melody opens up into what is absolutely a love song--set in a graveyard. And it's f*cking great.

Flowers dying in the window
This city screams like heaven's gone haunted
And I am waiting for that girl who told me once
She would love me forever
Dancing 'round the tombstones
Cemetery thighs alive, young and breathing
And I just want you to know
You have the most perfect limbs that
Have ever wrapped around me.

IV is a fantastic album from start to finish, and I have no doubt the performance will be just as solid. I'm beyond excited to see them live.

Majeure is the opener, and I'm thrilled about this too. The solo project of A.E. Paterra, drummer for Zombi, Majeure's sound is rightfully described as "sci fi disco of the highest caliber." I interviewed Zombi at Moogfest this year--check out my discussion with A.E. and Steve Moore here.

It's rare that I get this excited about a show, and I am planning to be right in front when Black Mountain takes the stage on Thursday night. You should be there, too. Doors at 8, show at 9. Majeure opens (so heck, I'll be standing right in front the whole time, smiling from ear to ear). Tickets are $15 in advance.